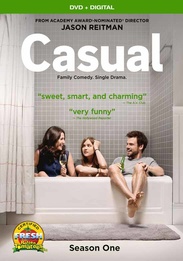 From creator Zander Lehmann and executive producer Jason Reitman (Academy Award®-nominated director of Up in the Air and Juno) comes "Casual," a Golden Globe®-nominated comedy that explores the funny and awkward dynamics of modern families and relationships. Recently divorced Valerie and her 16-year-old daughter, Laura, move in with Valerie's brother, Alex, an eternal bachelor and master of casual relationships. Together, they coach each other through the crazy world of dating while raising her teenage daughter.