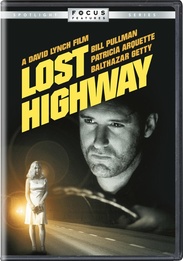 I>Lost Highway draws its plot, or rather its plots, from classic noirs, filled with desperate men and faithless women, expensive cars and cheap motels. Lynch fashions two parallel stories, one abut a jazz musician, tortured by the notion that his wife is having an affair, who suddenly finds himself accused of murder. The other concerns a young mechanic drawn into a web of deceit by a temptress who is cheating on her gangster boyfriend. These two tales are linked by the fact that both women are played by the same actress and may in fact be the same woman. The men are also connected by a mysterious turn of events that calls into question their very identities.