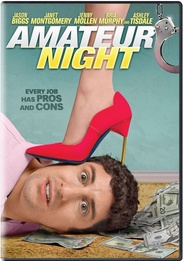 Guy (Jason Biggs) is an out-of-work expectant father desperate to find a job to support his growing family. At the urging of his wife (Jenny Mollen), he answers a Craigslist ad to be a driver. Heâs in for more than he bargained for when he learns heâll be the driver for three charismatic call girls (Ashley Tisdale, Janet Montgomery, and Bria Murphy) as they make their evening rounds, which turn out to be anything but typical.