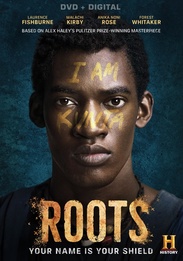 ROOTSâ ¢ recounts one familyâs struggle to resist American slavery. The gripping story is told through four generations, from the capture of Kunta Kinte in Africa to his transport to Colonial America in brutal conditions through successive generations fighting to win their freedom in the Civil War. Based on Alex Haleyâs best-selling novel which has resonated with millions of Americans, ROOTSâ ¢ reveals powerful, universal truths about the resilience of the human spirit.