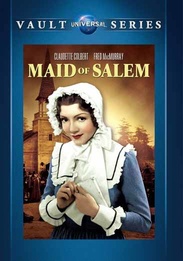 Two of the most popular actors from the Golden Age of Hollywood, Claudette Colbert and Fred MacMurray, star in Maid of Salem. Inspired by the true-life Salem "witch trials", an independent young woman's (Colbert) liberal attitude and love for an adventurer (MacMurray) leads to scandal in her small town. Accused of casting evil spells by the Puritan townsfolk, she must prove her innocence during one of the most notorious periods in American history.