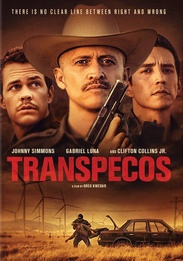 Depicting corruption as unavoidable as the desert heat, TRANSPECOS is a tense thriller that puts the audience in the shoes of three border patrol agents who man a check point on a remote highway. Rookie Davis (Johnny Simmons) and seasoned Flores (Gabriel Luna) work with the callous, world-weary Hobbs (Clifton Collins Jr.) to round out the trio. On what feels like another routine stop, the contents of one car will throw their lives out of control. As dark secrets are revealed, each passing hour will bring them closer to a nightmarish conclusion that could cost them their lives, in a world where the line between right and wrong shifts like the desert itself.