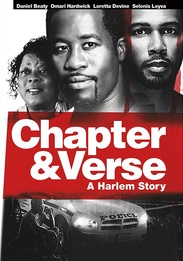 Upon his return from serving eight years in prison, reformed gang leader S.Lance Ingram struggles to adapt to a changed Harlem. Lance lives under the tough supervision of a Parole Officer in a Half Way House. Unable to find a job with the computer tech training he received in Prison, Lance is forced to take a deliveryman job in a food pantry. It is thus that he meets and is befriended by Ms. Maddy, a 60 year old strong and spirited grandmother. Lance assume responsibility for Tyâs well being, Ms Maddyâs 15 year old grandson â a promising student and artist who has become involved in a dangerous Harlem Street Gang. Lance tries to make peace with G-Rod, the charismatic Gang Leader and makes a deal to let Ty walk away. But when Gang Members decide to punish Ty for disobeying the âlaw of the streetsâ, Lance decides to sacrifice his âsecond chanceâ at freedom so that Ty can have a âfirst chanceâ at a better life.