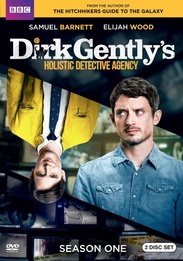 So when the world is suddenly full of strange things, it's up to "Dirk Gently's Holistic Detective Agency" (which is really just an eccentric English guy careening around with a hapless assistant) to figure out how all the pieces fit together. The first season of this oddball little comedy is a nonstop, tightly-tangled collection of strange clues, occurrences and characters that never stop their avalanche until the final moments.

Bellhop Todd Brotzman (Elijah Wood) is having the worst day of his life. His psycho landlord is demanding six hundred dollars, his sister Amanda (Hannah Marks) needs money to deal with a rare hallucinatory disease, he's just been fired after finding the corpse of a murdered billionaire, and now a strange English guy is invading his apartment. Oh, and he's also seen another version of himself wearing a dirty fur coat and a patriotic tank top.

That guy is Dirk Gently (Samuel Barnett), a cheerily eccentric young man who claims he's a holistic detective -- and he needs Todd's help to solve the murder.