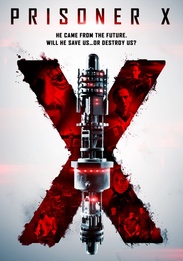 As the world rages in war and civil strife, CIA agent Carmen Reese arrives at a secret underground prison to interrogate a captured terrorist with links to recent attacks on American soil. But the prisoner is more than he appears -- he has arrived from the future with ninety-eight other time travelers who are still at large and wreaking havoc across the globe. Now it's a race against the clock as Carmen and the prisoner engages in a battle of wills to see whose version of the future will triumph.