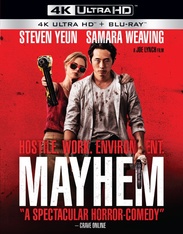 Derek Cho (Steven Yeun, âThe Walking Deadâ) is having a really bad day. After being unjustly fired from his job, he discovers that the law firmâs building is under quarantine for a mysterious and dangerous virus. Chaos erupts throughout the office as the victims of the disease begin acting out their wildest impulses. Joining forces with a former client (Samara Weaving, âAsh vs Evil Deadâ) who has a grudge of her own, Derek savagely fights tooth and nail to get to the executives on the top floor and settle the score once and for all.

Rated R for bloody violence, pervasive language, some sexuality/nudity and drug use.