Take Every Wave: The Life of Laird Hamilton 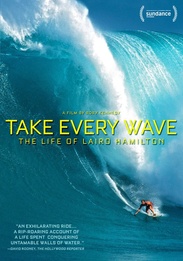 Laird Hamilton is perhaps the greatest big wave surfer of all time, a living legend who has tamed some of the world's mightiest waves. Amongst the surf community, he is also one of the most controversial figures, an innovator who has revolutionized the sport often to the dismay of purists. This thrilling, up-close portrait traces Hamilton's remarkable journey, from his rebellious childhood in Hawaii to his fearless first forays into surfing to his relentless pursuit of ever-bigger waves, a quest that ultimately led him to conquer what's been called "the heaviest wave ever ridden." Blending candid interviews with breathtaking action footage, TAKE EVERY WAVE is visceral, white-knuckle look at a life lived on the edge.