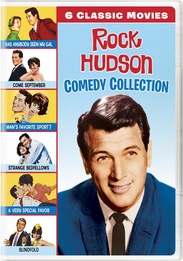 Handsome, witty and extremely talented, Rock Hudson was the embodiment of the Hollywood leading man during his illustrious film career. Join this iconic actor as he lights up the screen with 6 of his funniest films in the Rock Hudson Comedy Collection. Featuring co-stars such as Sandra Dee, Leslie Caron, Bobby Darin, Gina Lollobrigida and Paul Prentiss, this collection showcases the humorous side of an actor whose status as a screen legend continues to live on in cinema history.