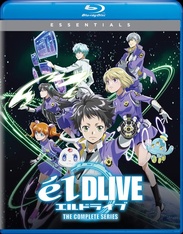 Middle-school student Chuta Kokonose has been hearing a voice in his head ever since he can remember.

When he finds himself recruited by the space police force known as elDLIVE, he learns that the source of the voice is a symbiotic creature living inside his body! While this alien companion can give him powers beyond his imagination, it all depends on Chutaâs confidence. Between insults from his beautiful but cold-hearted teammate, a tragedy from his past that comes back to haunt him, and an entire fleet of aliens threatening all of Earth, his determination is really put to the test.