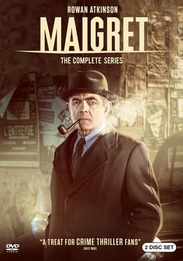 This crime drama is based on Georges Simenon's world-renowned fictional French detective Jules Maigret. Rowan Atkinson plays the legendary detective who features in 75 books written by Simenon. Other leading cast members include Fiona Shaw, Lucy Cohu, Shaun Dingwall and Rufus Wright. The first episode is based on the story `Maigret Sets a Trap', in which the detective investigates the murder of four women found dead in the Montmarte region of Paris, during the summer of 1955. After setting up an elaborate trap, Maigret is able to uncover crucial details of the events.