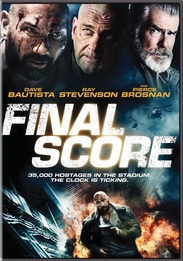 As England and Russia face off in a soccer match, Russian terrorists descend upon the stadium. Their mission: to find a revolutionary (Pierce Brosnan) hiding in the crowd-or blow the arena to bits. Standing in their way: Mike Knox (Dave Bautista), an ex-soldier with lethal fighting skills attending the match with his niece. When Mike's niece is taken hostage, he unleashes an all-out action assault, racing against time to save her and prevent mass destruction.

Rated R for strong violence and language throughout.