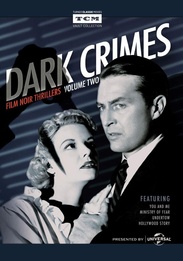 Turner Classic Movies and Universal Studios are proud to present DARK CRIMES: FILM NOIR THRILLERS, VOLUME TWO, featuring works by two iconic and distinctive directors of the noir style, Fritz Lang and William Castle. Born at the dark crossroads of the hard-boiled crime writing that thrived in midcentury American pulp magazines and the shadow-saturated, off-kilter camerawork of European directors who fled to Hollywood with the rise of Nazism, film noir perfectly captured the gloomier moods of wartime America, while somehow making danger and desperation irresistibly attractive. DARK CRIMES, VOLUME TWO includes Lang's You and Me (1938) and Ministry of Fear (1944), and Castle's Undertow (1949) and Hollywood Story (1951). All but Ministry are available for the first time on DVD in this collection, which also contains multiple digital bonus features including an introduction by TCM host Ben Mankiewicz, behind-the-scenes photos, production stills, poster and lobby card galleries, and an original essay by Film Noir Foundation founder and president Eddie Muller, making this the perfect box set for any noir aficionado looking to round out their collection. FRITZ LANG: Born in Vienna, Fritz Lang was responsible for some of the most technically and visually groundbreaking films of the silent and early sound era, including Metropolis (1927) and M (1931). Landing at MGM after fleeing Germany, he would make dozens of gut-wrenching features for various studios, including such iconic films noir as The Blue Gardenia (1953) and The Big Heat (1953). You and Me (1938) stars George Raft and Sylvia Sydney as Helen Roberts and Joe Dennis, two former convicts who find honest work in a department store and love with one another_until a dark secret from Helen's past drives them apart and drives Joe back to his criminal ways. Ministry of Fear (1944) stars Academy Award winner Ray Milland as Stephen Neale, a man just released from an asylum who struggles to convince anyone that he has uncovered a Nazi spy ring. Based on a novel by Grahame Greene, with a score by Miklos Rozsa, this atmospheric film is part noir, part spy thriller. WILLIAM CASTLE: Best remembered as the director and creative promoter of such campy horror films as The House on Haunted Hill (1959) and The Tingler (1959), Castle was a multi-talented director, producer, screenwriter and actor who helmed many competent B films for Columbia Pictures, including four titles in The Whistler franchise. Undertow (1949) stars B western and TV regulars Scott Brady and John Russell as old friends who reunite, and discover they have more in common than either would have suspected. Dorothy Hart and Peggy Dow play the love interests in this complicated tale of mob and moll double crosses. Hollywood Story (1951) takes aim at the darker side of the movie business. It stars Richard Conte as Larry O'Brien, a stage producer with dreams of being in the movie business who decides to shoot a documentary about the mysterious death of a silent film director, only to find himself in danger of suffering the same fate. With cameos by silent film stars such as Helen Gibson and Francis X. Bushman, it is reminiscent of Sunset Blvd. , released a year prior.