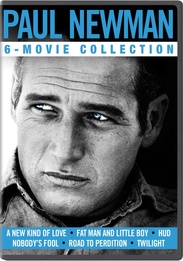 HUD: Having been burned by compromises to censors on his earlier films Cat on a Hot Tin Roof and Sweet Bird of Youth, Paul Newman decided to star in as uncompromising a property as he could find. That property was Hud, inspired by a portion of Larry McMurtry's novel, Horseman Pass By. Hud Bannon (Newman) is a young Texas rancher who lives with his cattleman father Homer (Melvyn Douglas) and his hero-worshipping nephew Lon (Brandon DeWilde). Hud is an amoral, cold-hearted creature; his father, who holds Hud responsible for the death of his other son, tries to imbue Lon with a sense of decency and responsibility to others, but Lon is devoted to Hud and isn't inclined to listen. When hoof-and-mouth disease shows up in one of the elder Bannon's cows, Hud is all for selling the herd before the government inspectors find out. But Homer orders the cattle destroyed (the film's most harrowing sequence), driving an even deeper wedge between himself and Hud. Finally, Hud steps over the line by attempting to rape Alma (Patricia Neal), the earthy but warm-hearted housekeeper. Paul Newman was so repellantly brilliant as an unregenerate heel that his Oscar nomination for Hud was a foregone conclusion. Although Newman lost the Oscar to Sidney Poitier in Lilies of the Field, Oscars did go to Neal for Best Actress, Douglas for Best Supporting Actor, and cinematographer James Wong Howe.

A NEW KIND OF LOVE: Paris. The perfect romantic setting for a funny, charming 'opposites attract' comedy romp. Especially when the attracting opposites are Paul Newman and Joanne Woodward. The Oscar.-winning stars (and real-life husband and wife) play a breezy newspaper reporter and a no-nonsense fashion buyer who share a nasty case of hate at first sight. But he takes a second look when she goes from grim to glamorous in one magical afternoon at Elizabeth Arden's Beauty Salon. Will l'amour triumph! It can't miss with Thelma Ritter, Eva Gabor and Maurice Chevalier lending Cupid a hand.

ROAD TO PERDITION: Two-time Academy AwardÂ® winner Tom Hanks in âone of his best performancesâ (Kenneth Turan, Los Angeles Times) stars as Michael Sullivan, a father fighting to keep his only son from traveling the Road to Perdition. Directed by OscarÂ® winner Sam Mendes (American Beauty), this towering motion picture achievement has been acclaimed by audiences and critics alike. Also starring Academy AwardÂ® winner Paul Newman and OscarÂ® nominee Jude law, Road to Perdition weaves a mesmerizing tale of a father and son bound together by tragedy and betrayal. On an unforgettable journey of honor, vengeance and redemption, they confront overwhelming odds â and forge an indestructible bond. Hailed for the powerhouse performances of its stars and the stunning impact of its story, Road to Perdition is an electrifying experience that will stay with you for a lifetime.

TWILIGHT: The Nobody's Fool (1994) team of Paul Newman, director Robert Benton, and scripter Richard Russo reassembled for this L.A. detective drama, beginning with a Puerto Vallarta prologue showing private eye Harry Ross (Newman) accidentally shot by 17-year-old Mel Ames (Reese Witherspoon) during his efforts to get her to return home. Two years later, the broke and divorced Ross lives in a garage apartment on the estate of Mel's parents, his movie-star friends Jack and Catherine Ames (Gene Hackman and Susan Sarandon). The cancer-ridden Jack is not unaware that Harry is attracted to Catherine. Delivering a package for Jack, Harry encounters elderly Lester Ivar (M. Emmet Walsh), who shoots at Harry and then dies. Harry's curiosity is provoked when he discovers that Ivar was an investigator checking into the disappearance of Catherine's first husband, written off 20 years earlier as an unsolved case, but now reactivated as Harry's sleuth-work leads him on a trail of past crimes and cover-ups. The Ames residence is actually the former Cedric Gibbons-Delores Del Rio home, and a never-completed Frank Lloyd Wright house near Malibu served as the Ames' ranchhouse.

NOBODY'S FOOL: Paul Newman earned an OscarÂ® nomination plus Best Actor honors from the National Society of Film Critics and New York Film Critics Circle for his portrayal of Sully, a likeable working stiff whoâs made a lifetime of bad decisions. But he unexpectedly has a chance to make right on some of them when his estranged son â and grandson â drop into his life. Melanie Griffith and Jessica Tandy are among the talented costars of this engaging film honored on numerous 1994 Ten Best Lists.