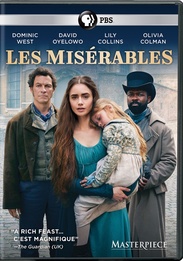 MASTERPIECE: Les Miserables The adaptation of Victor Hugo's classic novel Les MisÃ©rables from multi award-winning screenwriter Andrew Davies. The six-part drama adaptation stars Dominic West (The Affair, The Hour) as Jean Valjean, and David Oyelowo (Selma) as Javert in this landmark drama adaptation. They are joined in this epic event drama by Lily Collins (Rules Don't Apply, Love, Rosie), in the role of Fantine. With a striking intensity and relevance to us today, Victor Hugo's novel is a testimony to the struggles of France's underclass and how far they must go to survive. The six-part television adaptation of the renowned book will vividly and faithfully bring to life the vibrant and engaging characters, the spectacular and authentic imagery and, above all, the incredible yet accessible story that was Hugo's lifework.