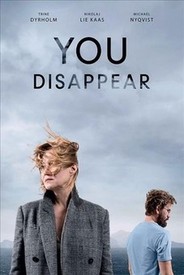 Mia is married to the successful headmaster Frederik, who is caught embezzling from his own school. But did he do this of his own free will â or has his personality been altered by the tumour lurking in his brain? Mia is desperate to uncover what kind of man she is actually married to. If the happiest three years of Miaâs life with Frederik were while he had a tumour in his brain, who was she married to before? YOU DISAPPEAR is a movie about the challenges we face as neuroscience forces us to rethink what we are as human beings.