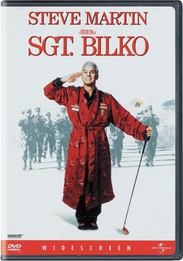 The army is known for churning out lean, mean fighting machines intent on protecting our great nation. But at Fort Baxter, there's one unit that can't even form a straight line. Martin is the inexplicable, the incorrigible, the invincible Sgt. Ernie Bilko, leader of a ragtag group of the sorriest soldiers ever to enlist in the armed forces. Instead of training his troops for battle, he passes on his legacy of gambling and shunning responsibility. Times get tough, however, when the base is threatened with a shutdown, and a by-the-book adversary, Major Thorn, is intent of taking Bilko's reputation down with it. Now, all bets are on Bilko to drum up his biggest scheme yet to save Fort Baxter and clear his name.