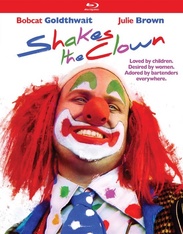 Dueling gangs of clowns are pitted against each other in this outrageously funny comedy written by, directed by, and starring Bobcat Goldthwait. Julie Brown co-stars as the hard-working waitress who stands by her clown.

Bobcat stars as Shakes, an amiable, alcoholic bozo from Palukaville, USA. But after one particularly wild night, Shakes wakes to find he's been framed for murder. The hilarious suspects include a pack of rude rodeo clowns, a gang of mimes, and an ambitious party clown with eyes for Shakes' sweetheart. As unlikely a superhero as you'll ever meet, Shakes takes to the streets for a slapstick showdown that blows the lid off the big top.