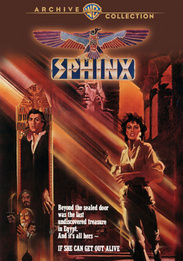 Lesley-Anne Down (Upstairs Downstairs), Frank Langella (Frost/Nixon) and John Gielgud (Arthur) star in this occult-tinged thriller based on the best seller by Robin Cook (Coma, Outbreak). Directed by Franklin J. Schaffner (Patton), Sphinx bristles with peril and shines with the eye-dazzling landmarks of ancient Egypt -- as well as a close up look at the lavish treasures of Tutankhamen, filmed with special permission. A determined young anthropologist (Down) has come across a clue leading to a long-forgotten royal tomb. And pays no mind to the notion that Egypt's last undiscovered treasure may carry a curse -- and perhaps that there may be some black marketeers eager to sustain the illusion of such a curse in a fashion as terrifying as any scary ancient legend.