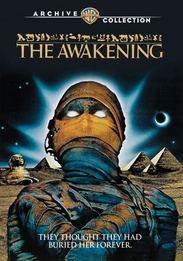 Mention Bram Stoker's name, and literature and movie buffs will conjure up Count Dracula. But there was more blood in Stoker's pen. He also wrote The Jewel of the Seven Stars, later filmed with chilling effect as The Awakening, grippingly directed by Mike Newell (Dance with a Stranger, Harry Potter and the Goblet of Fire) and sensuously shot on Egyptian locations by veteran cinematographer Jack Cardiff. Charlton Heston stars as an Egyptologist with a passion that will trigger several mysterious deaths. He's obsessed with a sorceress whose return has been prophesied -- and whose tomb he opened at the exact moment his daughter was born. Can ancient evil reach forward in time to curse the present? Horror movie fans know the terrifying answer.