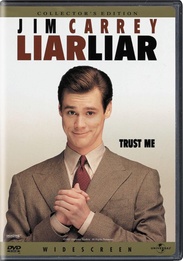 Fletcher Reede is a successful trial lawyer whose best weapon is his proficiency at lying. While he's nearly become partner due to his courtroom success, the lies he's told his son Max have strained their relationship. When Fletcher misses Max's birthday after promising he'd be there, Max makes a birthday with that his father won't lie for one day. The wish comes true at a bad time for Fletcher. A pending trial with an estranged wife, Samantha Cole, of a millionaire will make him a partner in the firm if he wins, yet he needs to lie to do so. Simultaneously, his ex-wife Audrey is planning to move to Boston with Max and her boyfriend Jerry if Fletcher fails to show up just once more. As the day progresses, Fletcher must do what he can without telling a lie, and finds that he's a better father and person for doing so.