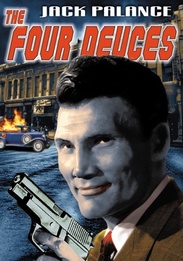 Bombs and bullets fly when two mobs feud in the wild era of prohibition. Operating out of a swank speak-easy named The Four, boss Vic Morono clashes with his arch rival, Chic Hamilton, who runs his own dive across town. Covering the mob war, newspaper reporter Russ Timmons manages to talk his way into Morono's inner sanctum, promising to write a flattering biography of him. When Timmons meets and falls in love with Morono's moll, all bets are off. Passion, pride and power collide in a final bloody battle for control of the criminal underworld.

Award-winning actor Jack Palance is larger than life as the sadistic and vengeful gangster who watches his whole house-of-cards empire collapse in an orgy of betrayal. Though best known in his later years for his Oscar-wining performance in the 1991 hit comedy, City Slickers, Palance earned early fame for his roles in Panic in the Streets (1950), Man in The Attic (1953) and Shane (1953). In 1956, he won an Emmy for his powerful portrayal of an aging boxer in Rod Serling's TV masterpiece, Requiem for a Heavyweight. Beautiful co-star Carol Lynley first drew the public's attention for her portrayal of Allison in Return to Peyton Place (1961) and later for playing the lead in Harlow (1965). She also appeared in the hit film The Poseidon Adventure in 1972.