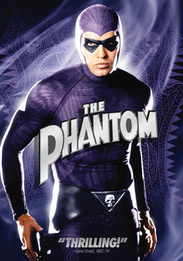 The legend of "The Phantom" began four hundred years ago when a small boy witnessed his father's savage murder at sea by pirates of the Sengh Brotherhood. Washed ashore on the edge of the Bengall Jungle, the boy swore an oath of vengeance, to fight piracy, cruelty, and injustice in all its forms. That boy became the first Phantom, creating a sacred and secret tradition passed down from father to son over twenty generations. No one understood how The Phantom could live for so long a period -- and so he was believed to be immortal. Join the legend as The Phantom fights evil in the form of industrialist Xander Drax, who, along with the blood-thirsty pirates of the Sengh Brotherhood, attempt to gain control of 3 priceless skulls -- one silver, one gold, and one jade - that, when combined, give the possessor extraordinary powers. From the streets of New York City to the deep recesses of the Bengalla Jungle, join the fray as The Phantom battles evil in his own spectacular way!