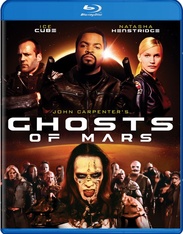 It's 200 years in the future. Man is rapidly terraforming Mars into a place that can sustain life. The only problem is that life already exists here and it's not too fond of its new co-habitants. A routine prisoner transfer goes awry when the police run into a Martian life force that transforms humans into their killing drones.

Rated R for strong violence/gore, language and some drug content.