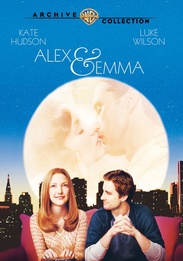 A writer suffering from terrible writer's block, decides to put himself in danger to solve his problem. He accepts a $50,000 advance for a novel to be completed in 30 days so he can pay off his mob debts.

The only problem is that if he fails to deliver a book in 30 days, the publisher will own everything that he writes from there on out. So, he hires a stenographer who helps him meet his deadline and become his muse in the process.