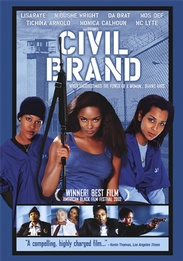 Frances Shepherd has been sent to the "pen" for killing her abusive husband. After being abused, violated and persecuted by the prison warden, the women from the cellblock rise up and revolt against the injustices of the penitentiary and the "new plantation" workplace that harvests human labor for big-time profit. Nothing will stop Frances and her fellow inmates in this brutal battle for justice.

Rated R for violence including a rape, and for pervasive strong language.