The X-Files: The Complete Eighth Season 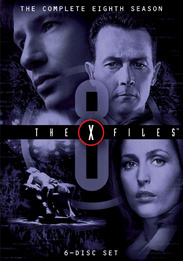 From the arrival of agent John Doggett to the impending birth of Scullyâs baby, the eighth season of The X-Files thrills from start to finish. Paired with the skeptical Doggett, Scully relentlessly keeps up the search for Mulder, never relinquishing hope that he is still alive. Ultimately, Mulderâs miraculous resurrection proves her right. Meanwhile, numerous reptilian creatures shape shift into human forms, including people familiar to Scully and Doggett, which makes them question who to trust. Clues about a tragedy from Doggettâs past emerge as the mysteries of alien life and the paranormal continue to challenge the risk-taking agents.