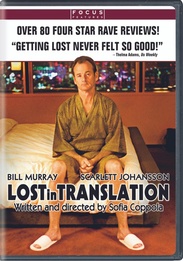 Bob Harris and Charlotte are two Americans in Tokyo. Bob is a movie star in town to shoot a whiskey commercial, while Charlotte is a young woman tagging along with her workaholic photographer husband. Unable to sleep, Bob and Charlotte cross paths one night in the luxury hotel bar. This chance meeting soon becomes a surprising friendship. Charlotte and Bob venture through Tokyo, having often hilarious encounters with its citizens, and ultimately discover a new belief in life's possibilities.