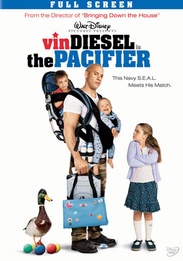 A Navy SEAL is recruited for a new top secret mission that no amount of SEAL training could prepare him for: baby-sitting.

When a prominent government scientist is assassinated, the SEAL is sent in undercover to protect his five unruly children. Now, the soldier must balance changing diapers with killing the bad guys.