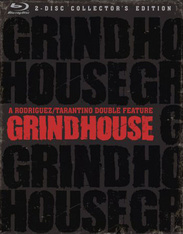 In Tarantino's "Death Proof," Austin's hottest DJ, Jungle Julia, sets out into the night to unwind with her two friends Shanna an Arlene. Covertly tracking their moves is Stuntman Mike, a scarred rebel leering from behind the wheel of his muscle car, revving just feet away.

In Rodriguez's "Planet Terror," two doctors find their graveyard shift inundated with townspeople ravaged by sores. Among the wounded is Cherry, a dancer whose leg was ripped from her body. As the invalids quickly become enraged aggressors, Cherry and her ex-boyfriend Wray lead a team of accidental warriors into the night.

Released by Dimension and The Weinstein Company. See more credits.