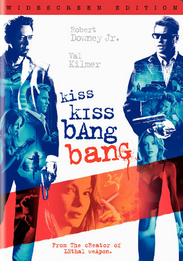 In Kiss Kiss, Bang Bang, a breezy take on writer-director Shane Black's trademark buddy action/comedy oeuvre, a petty thief (Robert Downey Jr.) is brought to Los Angeles for an unlikely audition and finds himself in the middle of a murder investigation, along with his high school dream girl (Michelle Monaghan) and a detective (Val Kilmer) who has been training him for his upcoming role.