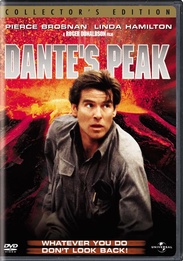 Dante's Peak is a peaceful small town community that's just been named as one of the best American cities to live. It's also home to a dormant volcano that's drawn the interest of volcanologist Harry Dalton of the U.S. Geological Survey. After some preliminary research, he tells town mayor and single mom, Rachel Nando, that the town should begin preliminary evacuation plans. His boss, Dr. Paul Dreyfus, however is too cautious and didn't want to spook the investors away from the city. Nevertheless, Harry's seen this before and as more indicators point to a major eruption, he tries to convince Rachel that she and her family are in danger. After an initial, small eruption, Harry and Rachel race to get themselves and the townspeople to safety before the big blast occurs.