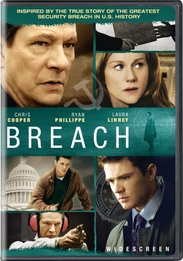 Then O'Neill learns his true mission: finding proof that Hanssen has been selling American secrets to the Soviet Union for years.