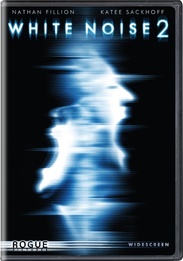 Following the brutal murder of his wife and child, Abe Dale (Nathan Fillion) barely survives a suicide attempt, and begins to believe that his Near Death Experience has left him with the power to identify those about to die. A glowing aura that only he can see singles out the doomed and Dale, traumatized by his inability to save his own family, is determined to keep as many of people alive as possible. But when he begins to pull those back from the verge of death, he finds that the price for cheating fate is higher than he could ever have imagined. Inspired by stories of the very real phenomenon of Near Death Experience, White Noise 2 examines the ultimate penalty for interfering with destiny.

Rated PG-13 for intense sequences of violence and terror, some disturbing images, thematic material and language.