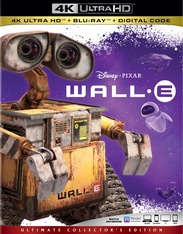 What if mankind had to leave Earth, and somebody forgot to turn the last robot off? WALL-E, a robot, spends every day doing what he was made for. But soon, he will discover what he was meant for. From Academy Award-winning writer-director, Andrew Stanton, Disney/Pixarâs WALLâ¢E is the story of one robot's comic adventures as he chases his dream across the galaxy.