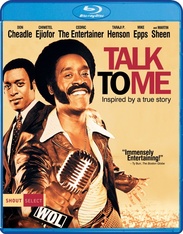 Don Cheadle portrays the one and only Ralph Waldo ï¿½Peteyï¿½ Greene Jr.; Peteyï¿½s story is funny, dramatic, inspiring ï¿½ and real. In the mid-to-late 1960s, in Washington, D.C., vibrant soul music and exploding social consciousness were combining to unique and powerful effect. It was the place and time for Petey to fully express himself ï¿½ sometimes to outrageous effect ï¿½ and ï¿½tell it like it is.ï¿½ With the support of his irrepressible and tempestuous girlfriend Vernell (Taraji P. Henson), the newly minted ex-con talks his way into an on-air radio gig. He forges a friendship and a partnership with fellow prison inmate Miloï¿½s (Mike Epps) brother Dewey Hughes (double Golden Globe Award nominee Chiwetel Ejiofor). From the first wild morning on the air, Petey relies on the more straight-laced Dewey to run interference at WOL-AM, where Dewey is the program director. At the station, Petey becomes an iconic radio personality, surpassing even the established popularity of his fellow disc jockeys, Nighthawk (Cedric The Entertainer) and Sunny Jim (Vondie Curtis Hall). Combining biting humor with social commentary, Petey openly courts controversy for station owner E.G. Sonderling (Emmy Award winner Martin Sheen). Petey was determined to make not just himself but his community heard during an exciting and turbulent period in American history. As Peteyï¿½s voice, humor, and spirit surge across the airwaves with the vitality of the era, listeners tune in to hear not only incredible music but also a man speaking directly to them about race and power in America like few people ever have. Through the years, Peteyï¿½s ï¿½The truth just isï¿½ style --- on ï¿½ and off-air ï¿½ would redefine both Petey and Dewey, and empower each to become the man he would most like to be.

Rated R for pervasive language and some sexual content.