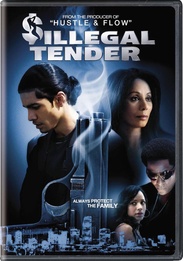 After the gangsters who killed his father come to settle a score, a teenage boy and his mother turn the tables on the killers. Producer John Singleton and writer/director Franc. Reyes join forces to tell the story of one Latino familyï¿½s quest for honor and revenge as the hunted become the hunters in the new thriller Illegal Tender.

Wilson De Leon, Jr. (Rick Gonzalez) is an exceptional college student with an adoring girlfriend, doting mother and a future full of promise. He has never wanted for anything, and he has never been forced to stand his ground. But when ghosts from his motherï¿½s past come back to haunt his present, he must defend his familyï¿½and quickly turn into the strong man his father prayed heï¿½d become.

Nothing could stop Wilsonï¿½s mother, Millie (Wanda De Jesus), from protecting her two boys. Forced to flee her home after gangsters killed her husband, she made an oath to give her children only the best. But all that changes when an enemy from the past catches up with them. Itï¿½s finally time to take actionï¿½and now, theyï¿½re done running.

Weapons at the ready, Wilson, Jr. and Millie prepare for a final showdown with the murderer who robbed him of a father and her of a husband. Now, in a battle fueled by family ties and blood feuds, it will become very clear what happens when anyone tries to come between this son and his mother.

Rated R for violence, language and some sexuality.