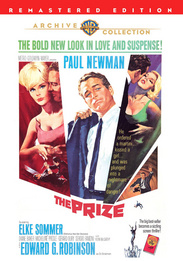 Top writers, scientists and leaders converge annually on Stockholm to take part in the awarding of the prestigious Nobel Prizes. This year, however, some honorees will find the great event eclipsed by a greater challenge: staying alive. Paul Newman is up to his famed baby blues in danger and intrigue as Andrew Craig, a hard-drinking author and Nobel winner for literature. At first dismissive of the award and only interested in the cash it brings, Craig finds his writer instincts and wit sharpened when he senses the physics prize winner (Edward G. Robinson) is an impostor. He sets out to expose the hoax, freefalling into a Cold War ploy of secrets, pursuits, subterfuge and assassins adapted for the screen (from Irving Wallaceâs bestseller) with spice and wit by Ernest Lehman (North by Northwest, Sweet Smell of Success).