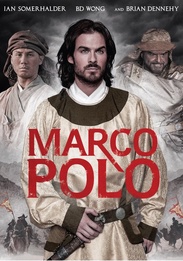 His personal journey changed the European understanding of the world forever. This is the absorbing true story of Venetian explorer Marco Poloâs arduous trek to the Eastâand beyond. Literally, itâs the adventure of a lifetime.

Sent on a mission to accompany two priests to china with the goal of converting Kublai Khan (Brian Dennehy, Golden Globe winner for Death of a Salesman) and his court to Christianity, Marco Polo (Ian Somerhalder, The Vampire Diaries, Lost) finds himself left to carry on alone when the priests turn back. But Polo pushes on till he reaches the court of Kublai Khan where along with his servant, Pedro (BD Wong, Law & Order: SVU) he is accepted and lives for many years despite clear danger. After two decades Polo returns to the West with a chronicle of his experiences.