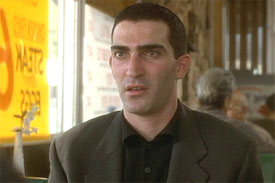 You haven't been scared by a movie until you've watched the Winkie's scene in Mulholland Dr.

Think about it: what's more scary? Going into a horror movie expecting to be scared or going into a comedy or drama flick and getting the surprising thrill of a lifetime? There are only so many times Jason or Freddy can jump out and claim another innocent victim.

Here is Metromix's inspired list. Again, they are in no order (well, besides chronological). See their site for a detailed explanation of each.

I can definitely attest to the freak-out moments in several of these. But on the other hand, I have never watched United 93. And that's precisely the reason why. The true story seems too scary to even think about let alone watch.

Of course documentaries can be scary. That's kinda they're point, isn't it? I've heard great things about Lake of Fire, the very balanced doc about abortion.

I remember as a kid behind scared out of my gourd by the Nostradamus docu-drama The Man Who Saw Tomorrow. The late 1980s gloom-and-doom predictions of this 16th Century prophet were too much for my adolescent mind to handle.

Another great '80s scary scene was in a kid's movie of all things: Pee-wee's Big Adventure. For those who've seen it, you know exactly the large part I'm talking about. I don't want to spoil it for those who haven't. Watching the scene now for the first time in years, it doesn't freak me out nearly as much as it did back then.

What about you? Do you have a favorite scary movie or scene in a non-horror movie -- from this decade or any decade? I'd love to hear about it.

Of course I asked my colleague John for his favorite. He promptly replied with, "Hmmm... There was that scene at the end of The Crying Game." Indeed, John, that movie haunts men to this very day.