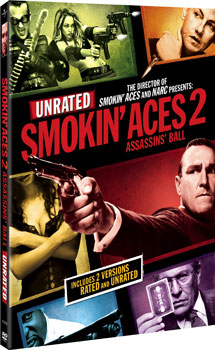 I'm sure there's no coincidence that Universal announced their direct-to-video sequel to Smokin' Aces the same week that Boondock Saints II is set to hit theaters. It's called theatrical drafting and while it's usually timed to have the title street the week a big theatrical title comes out, this approach might actually pay off.

While the two titles are anything but kin, they are in the same gritty violence vein. With The Boondock Saints, it was a hit with audiences creating an underground swell of support so large that it was able to overcome writer/director Troy Duffy's enormous ego and literally will the sequel to existence.

On the other hand, audiences failed to connect with the more glossy, star-laden Smokin' Aces. Which is a shame because given all of its shortcomings, Smokin' Aces is hard action thriller that does stand the test of time. Of course, the challenge is how do you create a sequel to a movie in which almost all of the principal cast perishes?

Smokin' Aces 2: Assassins' Ball keeps the same general storyline intact with various hit men (and women) all vying for a big payday by taking out a hard to reach target. Lazlo Soot, the assassin of a million faces returns along with the popular Tremor brothers (sort of), but other than that Smokin' Aces 2 (which come on, totally should've been called "Smokin' Deuces") will fall back on the convention of the genre.

Well that and tried and true genre star Vinnie Jones. Watch the trailer below and tell us what you think.