Review: Jeremy Piven revs his comedy engine in 'The Goods' 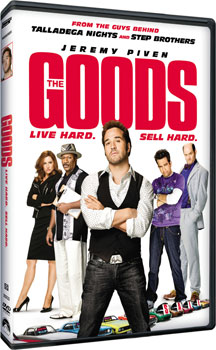 I consider Jeremy Piven one of the coolest dudes acting today. A lot of his roles have a cocky swagger few others can match. If you've seen PCU, Smokin' Aces, or any episode of Entourage, you know what I'm talking about. Even when he's playing a square, like in Old School, he does so with a lot of snarkiness.

Don "The Goods" Ready and his team of ruthless car salesmen are called upon by aging dealer Ben Selleck (James Brolin) to revive his declining business. They are rude mercenaries who must shape up Selleck's miserable staff before he loses the dealership.

When the film got a modest theatrical release in August, it really didn't find an audience -- and that really came as no surprise. Our economic climate has businesses failing everywhere, especially in the automobile industry. Nobody wanted to watch a comedy about it. The Goods became a victim of its own circumstances.

The film will undoubtedly find a better response on DVD where repeat comedies like this one excel. The movie bills itself as coming from "the guys behind Talladega Nights and Step Brothers." (Those guys being producers Will Ferrell and Adam McKay.) The comparison is good as it's the caliber of funny you can expect here.

If anything, it goes further over the top than these other two flicks -- which isn't necessary a good thing. Some of the recurring jokes go a little too far. But at the same time, it finds a lot of good humor in the prime subject of car sales. 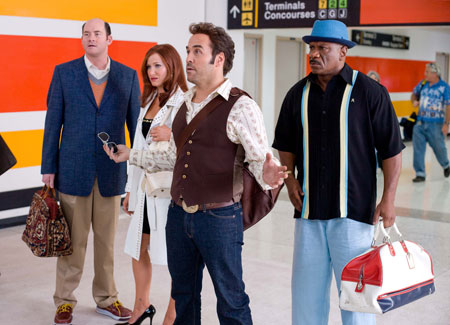 Brolin is great, as usual. Jordana Spiro plays his daughter and the object of Ready's desire. Rob Riggle plays his very young son -- a joke that's funny in itself. His lame sales staff include Ken Jeong, Tony Hale, and Charles Napier. They're all faces you'll recognize and they provide some decent laughs. Comedy man-of-the-moment Ed Helms (from The Office and The Hangover) even makes an appearance as Brolin's future son-in-law.

The movie really reminds me of one of my all-time favorites, Happy Gilmore. It's just as bizarrely funny. And The Goods has a surprising cameo, kinda like Ben Stiller in Happy. In fact, the two cameos share similar facial hair. There's a lot more raunchiness in The Goods.

I really have to blame director Neal Brennan for getting in the way of what could have been a much better movie. Besides the made-for-TV Totally Awesome, this is his first feature film. It's pretty poorly edited, perhaps the victim of Brennan's TV background.

There are a lot of laughs in The Goods. The problem is that they don't collectively amount to much. To borrow a car analogy, it's like they continually try to start the thing but it just revs a bit and dies. It wouldn't be so bad if they just had some patience but instead they keep trying only to flood the engine.

If you are looking for some used laughs, this model is worth a test drive. Of course, your mileage may vary.