Ashton Kutcher has a license to blah in 'Killers' (New trailer) 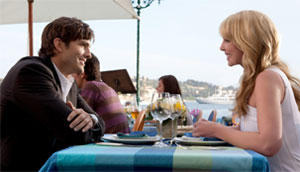 I'm not sure what my opinion is of this new Killers movie trailer. I like Ashton Kutcher. I like Catherine O'Hara. I like Tom Selleck. I really like Katherine Heigl. Them together in this action-comedy? I can't decide.

Single gal Heigl meets mysterious dude played by Kutcher. They fall head-over-heels. Everything is great until she discovers his true profession as an undercover assassin.

I don't know. Take a look at the trailer below. Send in your thoughts. Do you think this is something you'll go see? Why or why not?

Killers opens in theaters on June 4.

Alright, so killers does look like a rip off of Grosse Point Blank... but you're right, that's not the essential problem.

The problem there is that they've paired a traditionally immature, younger guy with a leading lady that usually has a manlier pairing. Heigl has been paired with traditionally rugged manly men like Gerard Butler, or Jeffery Dean Morgan. Even if she hasn't been paired with a manly man, she's been paired with someone who's been refined as an actor and comes off as more mature, like James Marsden or Justin Chambers. Either way, her more recent couplings have shown that she's been evenly matched with her love interests.

In this movie, it seems like they're pairing Daniel Radcliffe with Mischa Barton or Emmy Rossum. Despite being close to the same age, Heigl is more the woman while Kutcher will eternally seem like a little boy. Of course the girls will see the "man" in his shirtless muscle scenes, but even with Heigl playing the innocent angle with her naivety, it doesn't come across as a macho assassin man match with a innocent woman. It comes off like an innocent boy trying to play the part while the hot and experienced woman tries to dumb down her personality to fit a role.

However, if they replaced Kutcher with a man like Ryan McPartlin or Chris Evans, actors who have established a âmanlyâ acting persona, it wouldnât feel so disingenuous. It would seem much more like Heigl fits the part, because sheâs got a match, not someone who feels like heâs going to give us the âMichael Kelsoâ giggle at any minute.

I think Caitlin nailed it. The male casting is all wrong. Kutcher can't pull off this tough guy assassin role.