Sandra Bullock, Ryan Reynolds to reteam for 'Most Wanted' 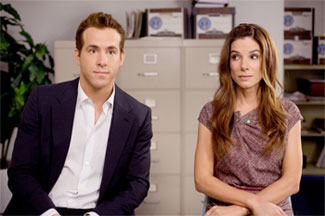 Uhhh, you want us to remake 'The Bounty Hunter'?

Two of Hollywood's most bankable stars are reuniting for a new action-comedy titled Most Wanted. Headliners Sandra Bullock and Ryan Reynolds are set to reteam with their The Proposal director Anne Fletcher.

According to Variety, Universal (the studio producing the flick) is keeping the plot under wraps. However, ComingSoon.net has this description:

In the action-comedy, Bullock plays a woman on the run with Reynolds as an agent who is supposed to be handling her.

The project is described as having a tone similar to that of Universal's 1988 release Midnight Run, with Robert De Niro and Charles Grodin, which the studio is developing a sequel for.

While I really do enjoy these two stars, this logline sounds tired. Didn't we just see this in The Bounty Hunter with Gerard Butler and Jennifer Aniston? Here's hoping the project is a little more creative than what this rumor tells.

What do you think? Would be interesting in seeing these two reunite? Should they bring along Betty White or this one? Or, is this script just as tired and uninspired as Bullock and Mrs. Ryan Reynolds' kiss at the MTV Movie Awards? Let us know your thoughts!