Double Wide Trailers: 'I Spit on Your Grave' 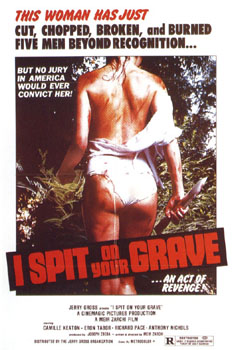 In 1978, a little movie called Day of the Woman was released in theaters and no one seemed to notice. In 1980, that same movie was re-released with the title I Spit on Your Grave and a world-wide controversy erupted.

Was the film nothing more than the senseless exploitation of violence against women, or was it actually a misunderstood attempt at a feminist manifesto. I'll be honest, I was 6 at the time of the re-release, but I became quite familiar with the film as the poster of the film became one of the faves during my teen years.

Shown over to the right, the poster really has become quite the pop cultural landmark. The fact that it shows a battered woman from behind in her underwear and is meant to entice you to watch the movie based on this ambiguous sexual advertisement should pretty much take all of the debate out of it.

But, to be fair, director Meir Zarchi has stated that he made the film after helping a woman who was raped and that the graphic rape scenes and violence were necessary to connect with the audience about the heinous nature of the crimes. While that's certainly open to discussion, I don't think many feminists would agree with the female lead enacting her revenge through a series of sexual advancements, up to and including the most reverberating scene in which she shares a bubble bath with one of her assailants and castrates him after starting to pleasure him.

No, I don't think you make too strong an argument for the strong feminine in the original movie. But, on October 6, a remake called I Spit on Your Grave Unrated will hit theaters. You all know how I feel about remakes, but this one got me thinking.

The trailer for the new version shares certain characteristics of the original movie, including both the allusion to the infamous castration scene and seemingly to one of the most controversial scenes in the original movie where the victim goes into church and asks for forgiveness for the violence that she's about to commit. But, it's the differences that strike me the most.

First, gone are the obvious use of "feminine wiles" to lure the attackers to their well-deserved doom. Instead, it seems that the movie will finally cast the female lead on equal footing as her male attackers. This should really help to definitively separate this version from the original and land it firmly out of the exploitation camp.

Whether the original I Spit on Your Grave is exploitation or not, one thing is clear, it broke new ground with a strong (albeit flawed perhaps) female lead enacting her own revenge without the help of a man. This movie blazed the trail that many other movies, such as Hard Candy and Kill Bill, used as a road map.

First up, here's the trailer from the 1980 re-release to theaters for I Spit on Your Grave. As you can see, it calls upon many of the popular trailer tricks of the day (repeating the title, eerie musical score, etc.) to give the audience a pretty good idea of what to expect from the movie. Clocking in over two and a half minutes, the one travesty of this trailer is that it pretty much gives away the entire movie and the ending. In fact, there's pretty much nothing left to the imagination.

After that trip down memory lane, I present the newly released full-length trailer for I Spit on Your Grave Unrated. At just over one minute long, the trailer is the perfect length to convey enough information about the movie, but not too much to give away everything. Sure, those who have seen the original will be immediately tipped off to the various scenes that harken back to the original, but any remake is bound to have that effect.

Of particular note that I did enjoy from the trailer is what appears to be a nod to Deliverance through the "dueling harmonicas." Or at least it sounds that way to me. Either way, I think you'll agree that this new trailer is far superior to the original one. As for the actual movies and how they relate to one another, only time will tell.

As an added bonus, I threw up the poster I Spit on Your Grave Unrated below. I'm sure they intended it as an homage to the iconic original, but even the most naive person can tell that despite revealing more than the original poster, it still ranks rather tame in the arena of accepted taste that you can find in most megaplexes these days. 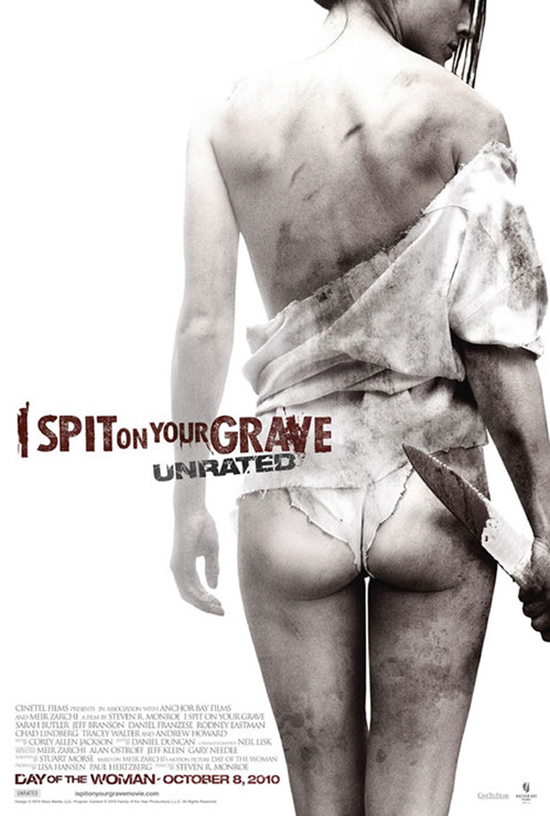