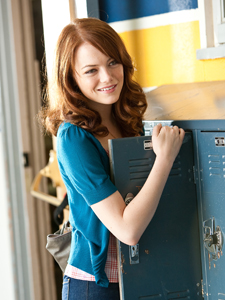 Emma Stone in 'Easy A'

When you hear that auburn-haired actress Emma Stone has snagged a role in the Spider-Man reboot, you immediately think that she's landed the role of Spidey's paramour Mary Jane. In the immortal words of Chris Berman, "not so fast my friend."

You would actually only be half right. Sony Pictures confirmed via a press release that Stone has been cast as Peter Parker's love interest in the movie, but instead of playing Mary Jane, Emma will be playing Gwen Stacy.

Well, if you're a comics lay person like me, you might be left scratching your head. That's ok, Entertainment Weekly has a nice primer of Gwen Stacy for the comic book deprived. Apparently, she's one of Peter Parker's love interests that pre-date Mary Jane and sports blonde locks, so it seems that Emma will have to visit her hairdresser before shooting begins.

If the name sounds familiar and you've only seen the movies, then you might remember that Bryce Dallas Howard (another redhead by the way) popped up in Spider-Man 3 as Gwen Stacy. Of course, comic nerds were all ticked about it. Apparently, there were some continuity issues to the original comics and it's looking like this reboot will address them.

Now, as someone who hasn't read any of the comic books, I was as intrigued as I'm sure you are about this. So, I read the Entertainment Weekly piece and spoiled myself. I will give you this ample spoiler warning. If you don't know who Gwen Stacy is and you want to remain oblivious to her existence, turn back now. Otherwise, proceed to the next paragraph.

So, it seems that Ms. Stone is set to meet an untimely demise in these movies. Of course, this is pure speculation, but if the reboot is planning to stay more true to the source, it's a good bet that Gwen's death will be the central conflict of this new incarnation, much as Uncle Ben's death drove the events of Spider-Man.

However, if there is but one truism when it comes to both comic books and Hollywood and their marital bliss, it's that anything goes. Heck, for all we know, the reboot could be going off on its own path and killing off Mary Jane and letting Gwen Stacy ride off into the sunset with the web slinger.

What do you think of this new casting wrinkle?