Part 2 of 'Everything is a Remix' cites Hollywood for unoriginality 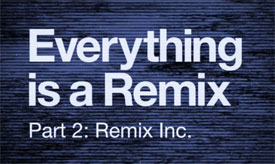 My partner-in-crime John turned me onto Kirby Ferguson's short film Everything is a Remix a while back. This fabulously edited documentary centers on originality, or the lack thereof, in popular art forms.

Released last year, part one focused on modern music and its tendency to rehash old riffs, beats, and lyrics into chart-topping hits. His chief example is Led Zeppelin, one of my all-time favorites. I knew all about their propensity for stealing from the early Blues masters. I couldn't blame Ferguson for slamming one of my favorite acts. Rather, it really endeared me to the piece.

Ferguson just released the second in this four-part series. It aims squarely at movies. The filmmaker cites Hollywood for its overuse of sequels and adaptations. It's not a new subject and it's one we have complained about numerous times before. This time around he makes an example of another of my loves -- Star Wars.

Give it a watch. It's really only about six or seven minutes in length.

Blah, blah blah... Joseph Campbell... Flash Gordon... Hidden Fortress. I knew all about the "source material" to George Lucas' space opera. I'd even known about some of the specific shots he examines. But, really? Can you bring fault with one of the most landmark movies ever?

It's not so much that Lucas borrowed from others but how he did it. He combined together so many varied items and added a technical skill that had not been seen before. I wish he would've gotten a little credit for that achievement.

I still loved this new video from Ferguson, as I did the first, but the tone of this one seems different. Rather than just presenting the facts, this one seems a lot more like criticism. Perhaps that's just my defense of Star Wars talking.

All in all, I have to hand it to Ferguson. This is another brilliant presentation. I look forward to Part 3 and will give him a donation to ensure he is able to do so. I hope someone in Hollywood -- someone not as easily offended by this program's evaluation of them -- is watching and gives this talented filmmaker a job.

(If you didn't make it that far in the video, go back and watch the post-credits segment where he discusses Quentin Tarantino and specifically Kill Bill.)

Here's the first part in the series in case you missed it:

Source: Everything is a Remix